It always ends up to be all about the Donkey 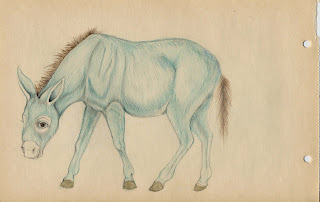 Happy almost new year! 2008 has beena rough one, but stay tuned 2009 looks to be great "The Garden Of Eye Candy" Book is due at the end of January, and I have a show schduled for April 2009. To be added to my e-mail list please e-mail me.
Posted by corrie gregory at 5:40 PM No comments: 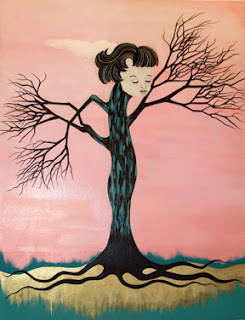 I have some painting at a super cool shop in Silverlake called:

Including this one:
Tree Girl 2007 Oil on Panel

And some exciting news. A few of my paintings will be included in a super cool book called "THE GARDEN OF EYE CANDY". Being published by www.bigbrosworkshop.com

The book is due for publication sometime later this year. Im super excited ......

Here is some info about the book

THE GARDEN OF EYE CANDY

The fashioning and creation of characters and dolls have existed from the beginning of human civilization. In the past, it was carved into the walls of caves, or made into dolls using raw materials found in nature. Human kind have always known a fascination, if not a need, in producing other beings in our likeness, much like the creation stories of how God fashioned us in 'his/her' own image.

These toys evolved into a fine craft with time, and were given to us as children. As our playthings and friends, they became an integral part of our imaginations and psyches. They served as markers and witnesses in our personal histories, appearing as characters in our stories, and as such, began a life of their own, out of the hands of their creators, in a world of their own.

Toy culture and these iconic images and characters, have grown in our time to be a huge phenomenon. It crosses the boundaries of fine art, high and low culture, the sweet and sometimes dark aspects ourselves. The Japanese were at the forefront with their cutting edge productions of Anime and Manga, prompting an Otaku cult which today has spread all over the world. US animation productions, from Mickey Mouse to the Simpsons have become household names and larger than life characters in our daily lives.

corrie gregory
North Hollywood, CA
Corrie Gregory creates visual stories, using gouache and mixed media on Dura-Lar and found paper. Her works are inspired by nature, but they do not belong in this universe. She often incorporates animals, roots, trees, internal organs, and found ephemera in her work. Materials such as century-old prescriptions and family relics reflect experiences and memories that can’t be easily described.